Rego is a prolific painter and printmaker, and in earlier years was also a producer of collage work. Her most well known depictions of folk tales and images of young girls, made largely since 1990, bring together the methods of painting and printmaking with an emphasis on strong and clearly drawn forms, in contrast to Rego's earlier more loose style paintings. 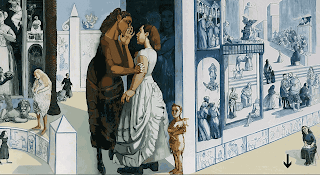 Yet in her earliest works, such as Always at Your Excellency's Service, painted in 1961, Rego was strongly influenced by Surrealism, particularly the work of Juan Miro. This manifested itself not only in the type of imagery that appeared in these works but in the method Rego employed which was based on the Surrealist idea of automatic drawing, in which the artist attempts to disengage the conscious mind from the making process to allow the unconscious mind to direct the image making. 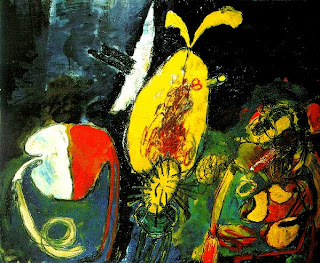 At times these paintings almost verged on abstraction, but as proven bySalazar Vomiting the Homeland,  painted in 1960, even when her work veered toward abstraction a strong narrative element remained in place, with Salazar being the right-wing dictator of Portugal in power at the time.
There are two principal causes for Rego adopting a semi-abstract style in the 1960s. The first is the simple dominance of abstraction in avant garde artistic circles at the time, which set figurative art on the defensive. But Rego was also reacting against her training at the Slade School, where a very strong emphasis had been placed on anatomical figure drawing. Under the encouragement of her fellow student and later husband Victor Willing, Rego kept a 'secret sketchbook', alongside her official school sketchbooks, whilst at the Slade, in which she made free form drawings of a type that would have been frowned upon by her tutors. 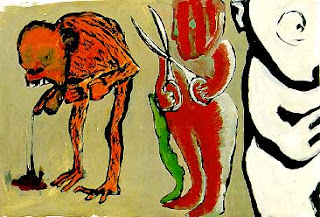 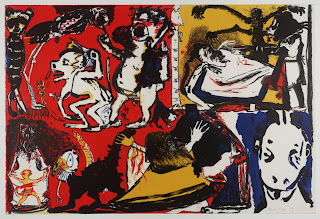 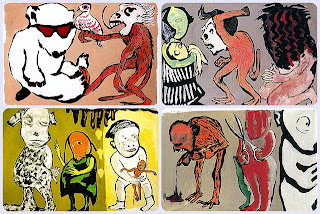 This apparent dislike of crisp drawing techniques in the 1960s manifested itself not only in the style of works such as Faust and the Red Monkey series of the 1980s, which resemble expressionistic comic book drawing, but in her acknowledged influences at the time, which included Jean Dubuffet and Chaim Soutine.[13]
A notable change of style emerged in 1990 following Rego's appointment to be the first 'Associate Artist' of the National Gallery, London, which was effectively an artist-in-residence scheme. Her brief was to ' work in whatever way she wished around works in the collection.' As the National Gallery is overwhelmingly an Old Master collection Rego seems to have been pulled back towards a much clearer, or tighter, linear style that is reminiscent of the highly wrought drawing technique she would have been taught at the Slade. The result of this was a series of works which came to characterise the popular perception of Rego's style, comprising strong clear drawing, with depictions of equally strong women in sometimes disturbing situations. Works like Crivelli's Gardenhave clear links to the paintings by Carlo Crivelli in the National Gallery, but other works made at the time, like Joseph's Dream and The Fitting, also draw spatially and in their subject matter from Old Master works by artists such as Diego Velázquez. 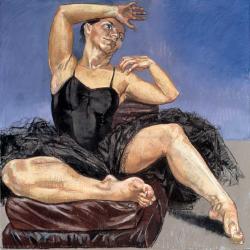 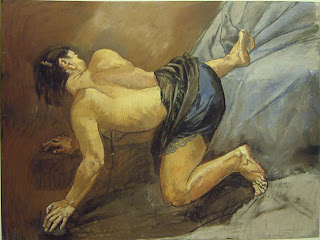 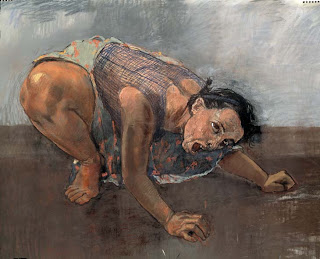 Having given up collage in the late 1970s, Rego began using pastels as a medium in the early 1990s, and continues to use this medium to this day, almost to the exclusion of oil paint. Amongst the most notable works made in pastel are those of her Dog Women series, in which women are shown sitting, squatting, scratching and generally behaving as if they are dogs. This antithesis of what is considered feminine behaviour, and many other works in which there appears to be either the threat of female violence or its actual manifestation, has associated Rego withfeminism, and she has acknowledged reading Simone de Beauvoir's The Second Sex, a key feminist text, at a young age and this making a deep impression on her.[16] Her work also chimed with the interest of feminist writers on art such as Griselda Pollock in Freudian criticism in the 1990s, with works such as Girl Lifting up her Skirt to a Dog of 1986, and Two Girls and a Dog of 1987 appearing to have disturbing Freudian sexual undertones. However Rego has been known to slap down critics who read too much sexual connotation into her work.
Another explanation for Rego's depiction of women as unfeminine, animalistic or brutal beings is that this reflects the physical reality of a woman as a human being in the physical world, and not idealised types in the minds of men.